The Graph (GRT) Price Prediction – August 8
It has been from a closure-technical angle that The Graph market price attempts to swing high against the valuation of the US Dollar. About a year ago, the crypto witnessed an all-time high of $2.88. And no data has been given regarding its all-time low since the last two years of operations. Price now trades around $0.1434 at an average percentage rate of 12.62 positive.

GRT/USD Market
Key Levels:
Resistance levels: $0.20, $0.25, $0.30
Support levels: $0.12, $0.10, $0.80
GRT/USD – Daily Chart
The GRT/USD daily chart showcases price attempts to swing high to outpace the valuation of the US Dollar on the threshold of the smaller SMA trend line. The 14-day SMA indicator is underneath the 50-day SMA indicator. The horizontal line drew at the $0.10 support level, denoting the baseline from which the current upswings have spanned. The Stochastic Oscillators are placed northbound closely around the range of 80, pointing toward the moon side.

Will the GRT/USD market lose momentum at the 50-day SMA’s value or the $0.20 resistance?

The 50-day SMA indicator provided a resistance around $0.1648 or thereabout, but the key resistance is at $0.20 as the GRT/USD market price attempts to swing high toward those points. Price may find the value lines difficult to breach past if bulls do not intensify efforts to sustain pushes closely above those points. As it is, the situation should attract investors to join the trend now.

On the downside of the technical, the GRT/USD market bears may allow some respite to play out alongside the upward motions until the situation degenerates into a convergence outlook at a higher-resistance trading spot over the trend lines of the SMAs before launching a selling order. The technical trading outlook still suggests the market will keep its ups and downs around the ranges of $0.10 and $0.20 for a while. 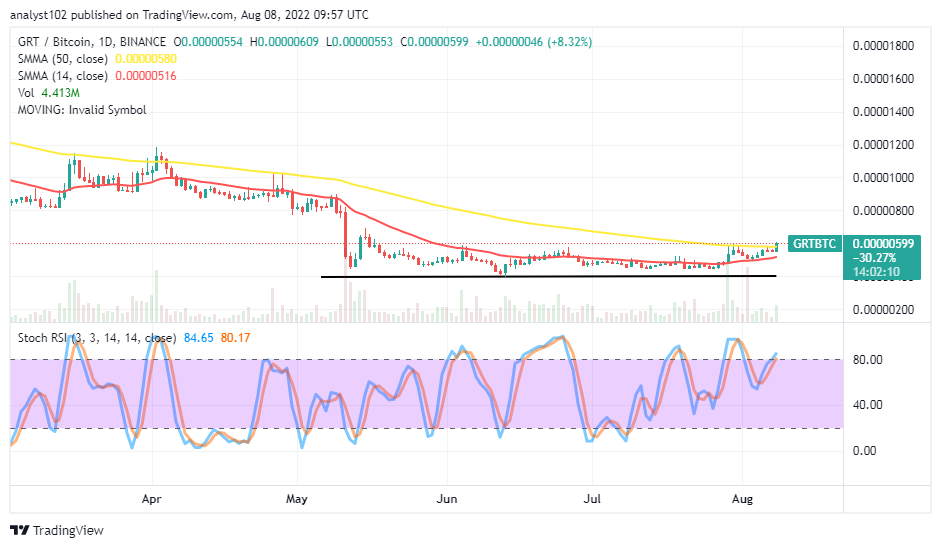 The Graph, as the base, has somewhat embarked upon pushing to the north side against Bitcoin in a slow-and-steady moving manner to break through the trend lines of the SMAs. The cryptocurrency pair price attempts to swing high past the value line of the 50-day SMA indicator above the 14-day SMA indicator. The horizontal line drawn is to serve the lowest baseline that the price has reached. The Stochastic Oscillators have crossed northbound from the 60 range, slightly into the overbought region. It would be technically ideal that